Sometimes the Clothes DO Make the Person! 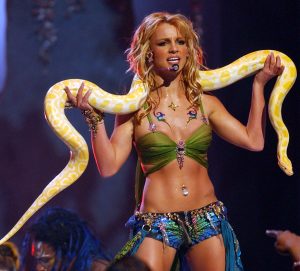 I have always chosen my work out gear for utility rather than style. Black leggings, grey or black tank top, black sports bra, what else do you need? Versatility, function over form… they go with everything! If I could find this holy trinity of attributes, I’d plunk down my money for a workout wardrobe bursting with all the charm and energy of the city morgue on a foggy evening and wear them over and over again until my thighs ripped through the crotch and shredded them into a kind of spandex coleslaw. 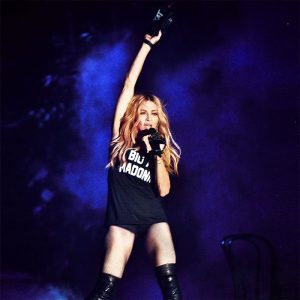 Madonna and her extensive glove wardrobe always give me hard #inspo

I’ve been coming to Hustle and Flow for three years this May. I can recall standing in front of the mirror during one of the first months I was attending, grey capri leggings and grey tank top in all their splendor, and feeling sorely out of place. Nobody made me feel that way, it’s just that as I looked around the lovely orange room at all the swirly, patterned yoga pants and hot pink sports bras and floral tanks and whatnot, I just kinda felt like a sad, dowdy prison guard while the humans around me were celebrating their bodies and having shown up to move with color and pattern. My workout clothes felt like a prison of my own making, letting the world know: “hey… I’m sort of ashamed of this meatsuit I’m walking around in.”

And this makes sense! There’s science behind the idea that “the clothes make the person.” We often think of clothes as a communicator to others about who we are but we forget that clothes can also be a tool to remind ourselves of who we are inside; that they can uncover secrets in our relationships with ourselves; and that they can help us express parts of ourselves that we lose touch with in our everyday lives. 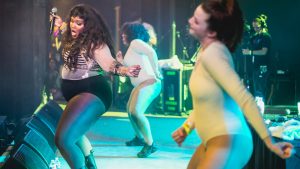 I have a friend back in Seattle who is a beardo cis-het-male, but that boy loves to put a dress on every now and again and shake it like a polaroid picture. For his entry into the lip sync competition at my going away party, he made a grand entrance in a crop top and miniskirt and sang “F*#k the Pain Away” by Peaches, basically blowing all of our minds with his sweet sexy moves and raw feminine sensuality. Not everyone can go there, even if that part of themselves is screaming from within for expression. Like, RESPECT, you know what I’m saying? And I know it’s true that this is so difficult, because breaking out of my personal workout prison built from grey tank tops and self loathing took me, like, three years. Well, three years after I realized it was a thing, anyway. So let’s just call it an even 41 years.

I love you and I don’t want you to make the same mistakes that I made! And it’s easier to do than I ever thought. Don’t box yourself in, don’t let the patriarchy try to tell you who it’s appropriate for you to be. Smash it from the inside! Science says it’s ok!

Here’s how it happened for me – one of the H+F instructors and I have a friend in common, and she had convinced our friend to come to Slow Grind this past Thursday. Usually when I Slow Grind I just wear my normal workout clothes, but as I attended more often I noticed that pretty much anything goes, as long as your junk is (mostly) covered. 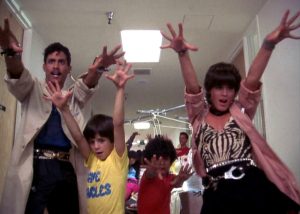 “Breakin'” was one of the first movies I ever saw that made me want to dance… and also get a handcuff belt. I NEED A HANDCUFF BELT SO HARD.

This mutual friend is a woman who performs with the Superhero Lady Armwrestlers of Portland (SLAP!) a super cool charitable organization in which badass women arm wrestle each other to raise money for different causes, most often children’s and women’s charities. They costume up HARD, and each wrestler typically brings her own themed entourage – for instance, one wrestler goes as Lumberjack Sally, complete with working chainsaw, overalls and sawdust spilling from her pockets, while her entourage hypes her up in Daisy Dukes and plaid shirts knotted at the waist. It’s awesome… and a little intimidating, if I’m being real with you. 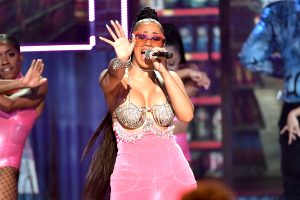 Cardi B keeping it feminine in pink dance wear.

I knew I had to impress our sartorially-inclined friend with my costume choices. So I decided to take some creative risks. I found a pair of high waisted underwears and some pink fishnets, and then I threw on a cropped t-shirt with the neck cut out. Why stop there? Some sloppy black eyeliner, terrifying purple lipstick and obnoxiously huge hoop earrings later, and I was like… oh SHIT you guys… this is ME. This is my inner slow grinder. I found her. I FOUND HER! 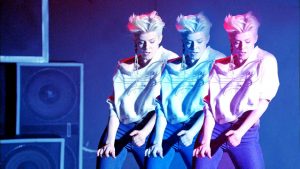 My favorite 40-something performer, Robyn, the badass I aspire to be every morning when I’m brushing my teeth to “Dancehall Queen.”

The instructor in this story and our mutual friend didn’t end up showing up to Slow Grind that night, but someone else did – the divine feminine inside of me who has been locked up in this Old Gray Prison by a very tenacious Prison Guard that was too afraid and ashamed to let her butt flaps wiggle in the wind and her tummy rolls spill out onto the floor and revel in just how high maintenance and EXTRA she is and just LOVE it. She showed up to love herself, to love ME, even though she’s not “perfect.” Perfect doesn’t really exist in the way we think it does anyway. But perfect for me was allowing sensual, sacred movements to take over in my body, this thing that loves me and does her best to keep me alive even when my brain makes dumb decisions that really seem like they’re going for the opposite. 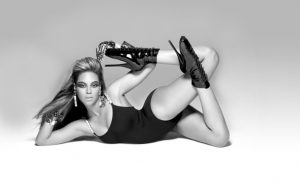 And I kinda feel like the outfit was the gateway. It might sound silly, but I’m excited to keep going and find out more about myself through kickass outfits and wearing my drawers in public. I’m looking forward to self discovery through thigh highs and lacy bras. This summer it’s all about Slow Grind OUTFITS, y’all. Join up, willya!